Mission Based Healing: Bipolar Doesn’t Mean A Pole Short of a Tripod

My name is Kimberly McGilvray; I’m a Senior Rover Scout/Cub Scout Leader with the 21st Highlanders at Simon Fraser University in Burnaby, British Columbia. When you meet me for the first time, you wouldn’t expect me to have a constant inner turmoil. You might assume that I am attending university and volunteer with a local Scout group. I have a mental disorder marked by alternating periods of elation and depression, which is known as Bipolar. Wikipedia provides a good plain language definition:

“Bipolar disorder is a psychiatric diagnosis for a mood disorder in which people experience disruptive mood swings. These encompass a frenzied state known as mania (or hypomania) usually alternated with symptoms of depression. Bipolar disorder is defined by the presence of one or more episodes of abnormally elevated energy levels, cognition, and mood with or without one or more depressive episodes.”

To illustrate this point, I have created the graph below with the following explanation to help you understand. 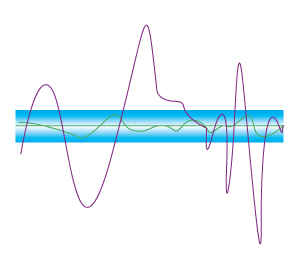 The blue line across the middle of the picture is the “normal” range of human emotional ups and downs.
“Downs” are when you get dumped by your partner, find out that after all your studying you still fail your exam, hear about your parents getting a divorce, or your pet has ended up on death’s door – for example.
“Ups” are when you’ve just passed that exam, eaten a rather delicious burger, finally got that promotion you’ve been waiting for, found out you’re about to become a parent, or just had delicious mind altering sex – for example.

The green line is an example of the mood swings a normal person may experience, kind of veering from ups and downs at an occasional but not overly dramatically or sudden sense.

The purple line is someone suffering from bipolar. I think you get the gist, somewhat sudden, erratic, and way above and below the normal range of ups and downs.

In 2008, before I joined Rover Scouts and became a Cub Scouts leader, the purple line was my daily life, which could and often did, change hourly. During my worst depression, the very thought of waking up was painful. I ached. I had zero desire to breathe, let alone take care of myself. I’ve even experienced the thoughts of wanting to harm myself and actually end my life. In my manic state, my very worst includes not being able to grasp any thoughts, not being able to understand others, feeling extremely anxious because there is never enough time (even though everything goes in slow motion), and to top it off, I can’t tolerate light or being touched. On the odd occasion I experienced paranoia and mild psychosis. These feelings can change every five minutes to every couple of weeks. It’s tiring, irritating and frustrating to never be in a constant state of being or mind set. I also constantly felt unwanted due to having my illness. As a result of my illness, I constantly felt unwanted and left out by my peer group; despite my best efforts to join in.

Thankfully, I haven’t experienced either of these states since I became a Cub Scout leader and Rover Scout with Scouts Canada. While it wasn’t an overnight “miracle”, I was able to feel the difference within a few weeks. While I have felt mood swings as described above, they have not been as severe as in the past.

Looking back, I am proud to say who I am today versus who I was in 2008 are two separate people. Prior to ‘08, I wasn’t sure how to communicate with others about how I felt, would have mood swings constantly, suffered from anxiety almost hourly, wasn’t comfortable in my own skin and didn’t have many close friends. I had a string of semi-abusive relationships, next to no optimism, zero self-esteem, living and relying on Persons With Disability (also known as PWD, a government pension) and I had no idea what to do with myself. This was a feeling I wasn’t use to at all. I had a plan for everything in my life at all times. And yes, this is another symptom of my illness, needing to have that type of control. It seemed that my life was going to be miserable, dependant on the government, and overall a disappointment to anyone who knew me. This filled me with dread, sadness, and due to this I generally wasn’t pleasant to be around.

Now, please understand that most of my difficulties were from adjusting to my medication, while also working with my doctor to find the right dosages, going through therapy, going through some heavy emotions/grieving and adjusting to life as a diagnosed Bipolar. Shortly after being diagnosed,  I lost my mother in late 2007 and went through the loss of my son in the spring of 2008. These both added extra emotional stress and problems to my already intense illness. My mother was my rock after being diagnosed and my son was, at the time, was a glimmer of hope to have a family and a normal life; something I’ve always wanted.

It was difficult to turn to my family members for support; we were all in different stages of grief and hurt over the loss of my mother. Many of my peer group had no experience and were not prepared to aid me through the grieving process; this made them uncomfortable resulting in a lonely time for me. I spent a lot of time alone, trying to sort through my feelings and getting into a more positive setting. Being alone didn’t help me at all, but rather made things worse. Talk about being between rock in a hard place.

After becoming a Rover Scout and Cub Scout leader five years ago, I was offered a support network unlike any other I have experienced in my life. I was given various opportunities to learn more about myself and how to use my quirks as an advantage. Most of all, I was welcomed even though I told everyone from the start that I was Bipolar. I had others who had gone through Depression and/or Mania. They wanted to support and help me through the difficult time.. 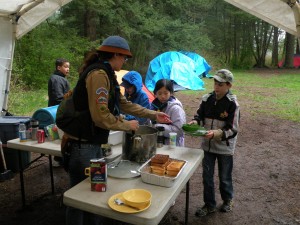 My time as a Cub Scout leader, and how it’s helped me grow into the person I am. When I first started, I was welcomed by the other leaders and put straight to working with the youth. The youth didn’t care that I was different, but rather they seemed to like me for it. I felt normal, appreciated, and all around good about myself. This was something I hadn’t really had the chance to feel before.

Over time, I moved into being a section lead where my Obsessive Compulsive Disorder (OCD) got a good workout by keeping on top of the program, the youth, and the constant questions from parents. My fellow leaders, the youth’s parents and group committee liked me because I was so detail oriented and committed to my role. I was challenged to do better constantly by my Cub Pack and group, which did wonders for my recovery and growth. Being a section lead used and strengthened many different skills that I quickly developed and drew upon my OCD continually.

Can you imagine what that little bit of acceptance of my most unique characteristic had on me? After a lifetime of being told I’m not “right” because this quirk makes me so organized and meticulous? Let’s just say the earth moved beneath me. The feelings I experience as a Cub leader help to keep me balanced, gave me a reason to maintain my health and something to look forward to, even on the dark days. After six months of being a Cub leader, my psychiatrist told me to keep with it and not to stop; it’s now part of my health plan. This simple weekly activity became a core element to me staying stable.

The core of my of my personal development, which occurred over the past couple of years with my time as a Rover Scout. At my first camp as a Rover, Skeeter 2008, I suddenly found myself falling into a wealth of friendship. No one cared that I was Bipolar or that I had various quirks. I was just another 21 year old girl at camp. The Rovers accepted me for who I was as a whole and challenged me to aim higher.

With the guidance and support of (now) very close friends, I have been able to go to post-secondary and earn a certification in my desired field of work, get a job in my desired field and get myself off PWD. Without the support of these friends from Scouting, I doubt I would have ever been able to do it. It was a long road but their encouragement, kindness and support made it possible.

There were a lot of rough times where I just wanted to stop everything, go back to the hospital and live there until the world seemed ok and safe again. I won’t lie, I still have the odd day where I feel like this, but they are almost once in a blue moon. My friends were able to keep me on track and supported me through it all.

Rovering challenged me out of my comfort zone and helped me get to Australia. In the spring of 2009, I heard about “Oz Moot”. I wanted to go, but was hesitant because of my illness. Going  outside of the country, to a place where next to no one knew me and I would be at the mercy of my illness at all times? Terrifying. Truly terrifying. I had a hard enough time going to visit Victoria with my partner, never mind going to the opposite end of the Earth by myself! 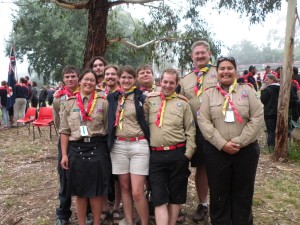 In the summer 2009 I became the National Contingent Leader of Canada for Oz Moot, and ended up going to the camp and spent a full month in Australia with next to no problems. I had a blast! There was a new level of independence I got to experience while in Australia that boosted my confidence and opened up many doors for me. I can live, function and have a normal(ish) life. I can do things like everyone else. I don’t need to have such a restricted life! There is hope for me! I found these to be very profound feelings to have after living like I was a piece of china. All because I was given the opportunity to go to Oz Moot with the support of the Rovers.

These days, I’m working full time in my desired field, working with my local Pack and Crew, have a strong network of friends and can hold my head up high and smile. I can count on both hands the people that I love and can rely on. On the over all, I am a healthy person and able to roll with the punches, if you will. I am finally on the “right” track. This is my best.

Every day isn’t easy, but Scouting has helped get me where I am now.

Yours In Scouting and Rovering,

8 responses to “Mission Based Healing: Bipolar Doesn’t Mean A Pole Short of a Tripod”