The North Star Award & other thoughts

Following up on the last post, I’ve done some chatting with some fellow Rovers and would like to share what I have so far. I’m not going to reiterate what was posted there, only what was audibly discussed off-line.

A few months ago, a small team of Rovers decided to design a Rover award scheme for our local council. We decided on the name of The North Star, since it is truly Canadian, one can always set your direction from it even in the darkest of hours, and stars are something to aspire to be.

The award had four badges to obtain before the final North Star award.

Never claimed the names were catchy. Those four are to be administered at the crew level, and we encouraged crews to personalize the names as they saw fit.

Out There (Physical Challenge)

The fifth and final portion of the award is only successfully earned after all four others have been, and an interview to explore if they have lived a “Scouting Life” is passed.

Together they form to create the final product. 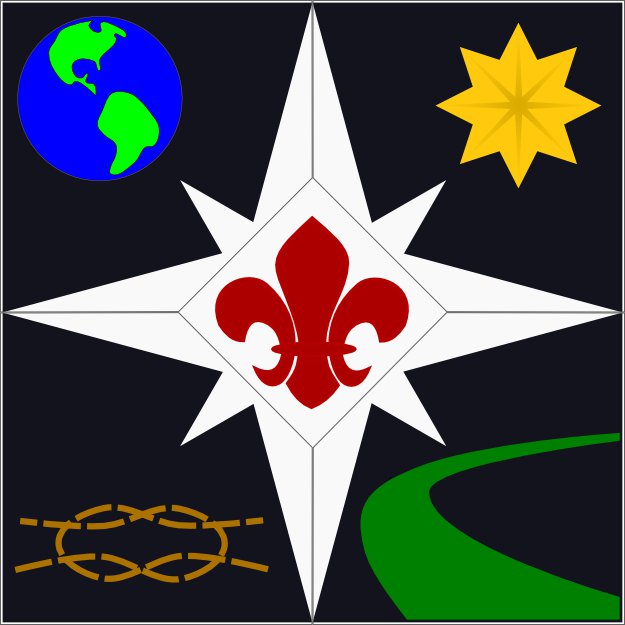 This was designed as a non-uniform badge (fire blanket for example) because anything we produce would not have been a sanctioned uniform badge. This allowed us greater freedom in the size of the patch.

Requirement Design Notes:
The requirements were deliberately left open. Rovers are of an age where the individual has to create their own identity. Further work would have been to flesh out examples of what kinds of activities would be acceptable (setting the bar), but a laundry list of requirements is not order. We aren’t Scouts anymore. No need for “Do X many jumping jacks, tie Y many knots, talk for 5 minutes about a topic.”

Of the six elements that the QVA works on, only vocational was not touched upon directly. That’s not to say that one of the four sub-badges could lead to vocational exploration or improvement. We didn’t think it would be as worthwhile to set out a requirement that a Rover should explore different vocations. Typical Rovers are either in a career, working towards one, or have an idea of what they’d like.

Tonight is a conference call for the team working on the top Rover award. I’ll be sure to share the thoughts and suggestions brought to me (thank you all!) and will report back shortly what we talked about.