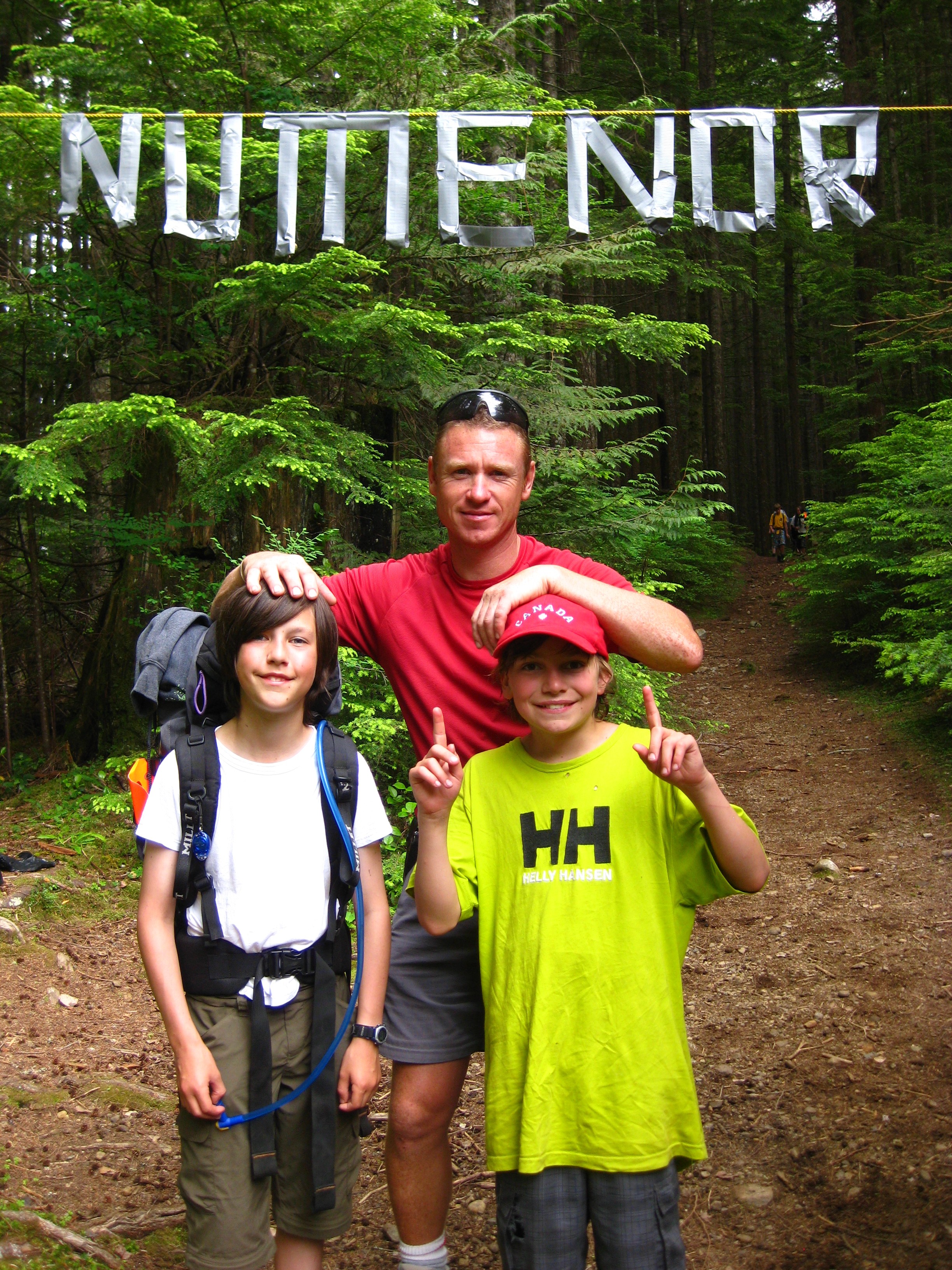 Númenor is the legendary island located in the Sundering Seas to the west of Middle-Earth. Traveling by giant ten person voyageur canoes and then by hiking, the 1st Kimberly Scout Troop rose to the challenge before them to reach Númenor, 564 meters above sea level.
[youtube=http://www.youtube.com/watch?v=10ajn21THyo] 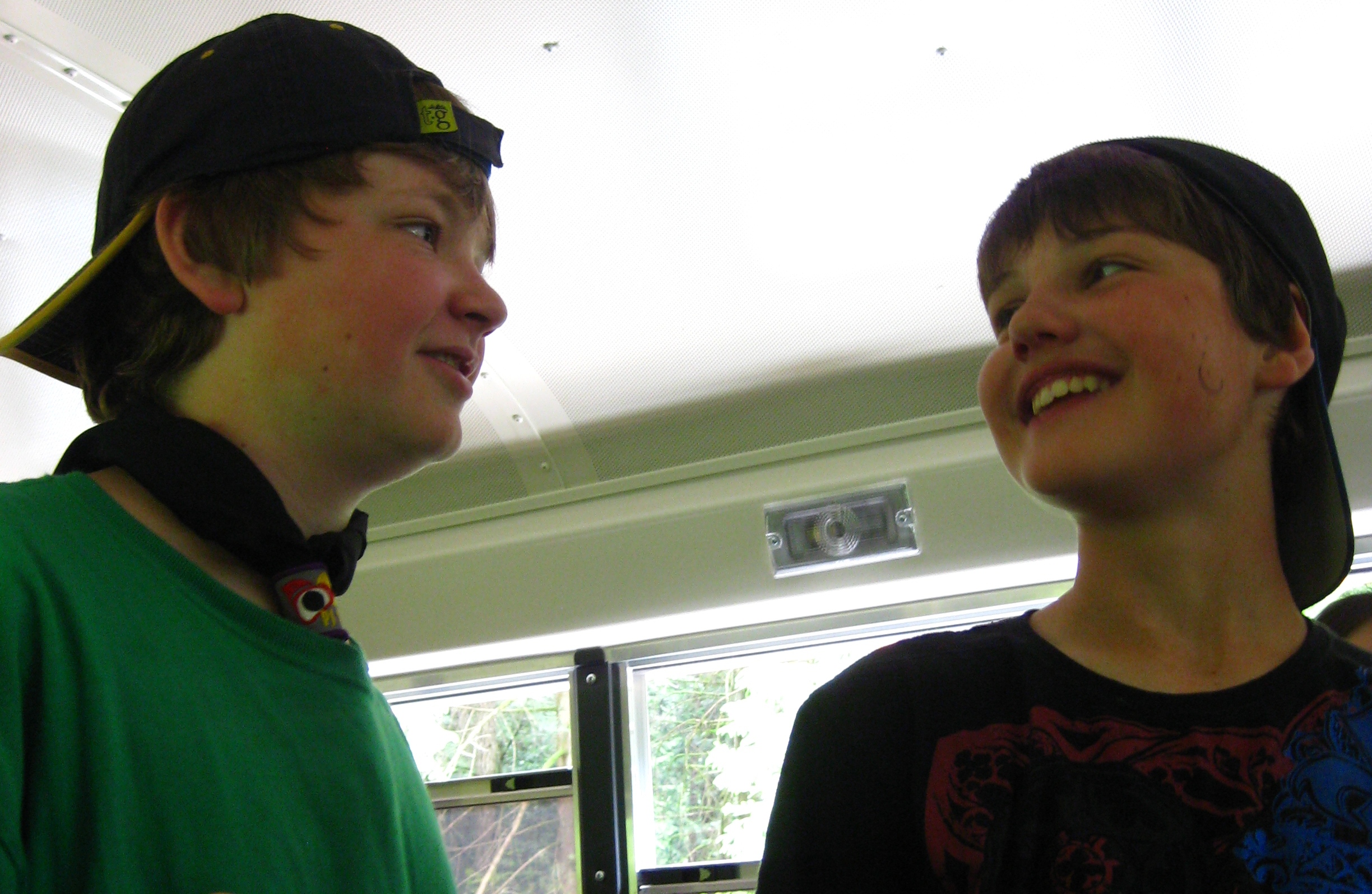 Monday morning they left PJ, their first test was on the bus ride; one of patience and willpower. The 99 verse song of the sirens would have gotten to lesser Scouts, but not these ones. They pushed through and championed on. A spot game of Frisbee during lunch (some of which was foraged) while waiting on the beach of Port Mellon between units brought the collective group together. The previous night’s travelers were heading our way with our future canoes, and the youth eagerly watched them make their way across the inlet.

Once loaded, Eric, our fearless OOS guide, taught us the draw and pry strokes, how to brace our paddles, how to stop (always important) and the importance of matching our strokes together. With final instructions from the safety boat, we were off! 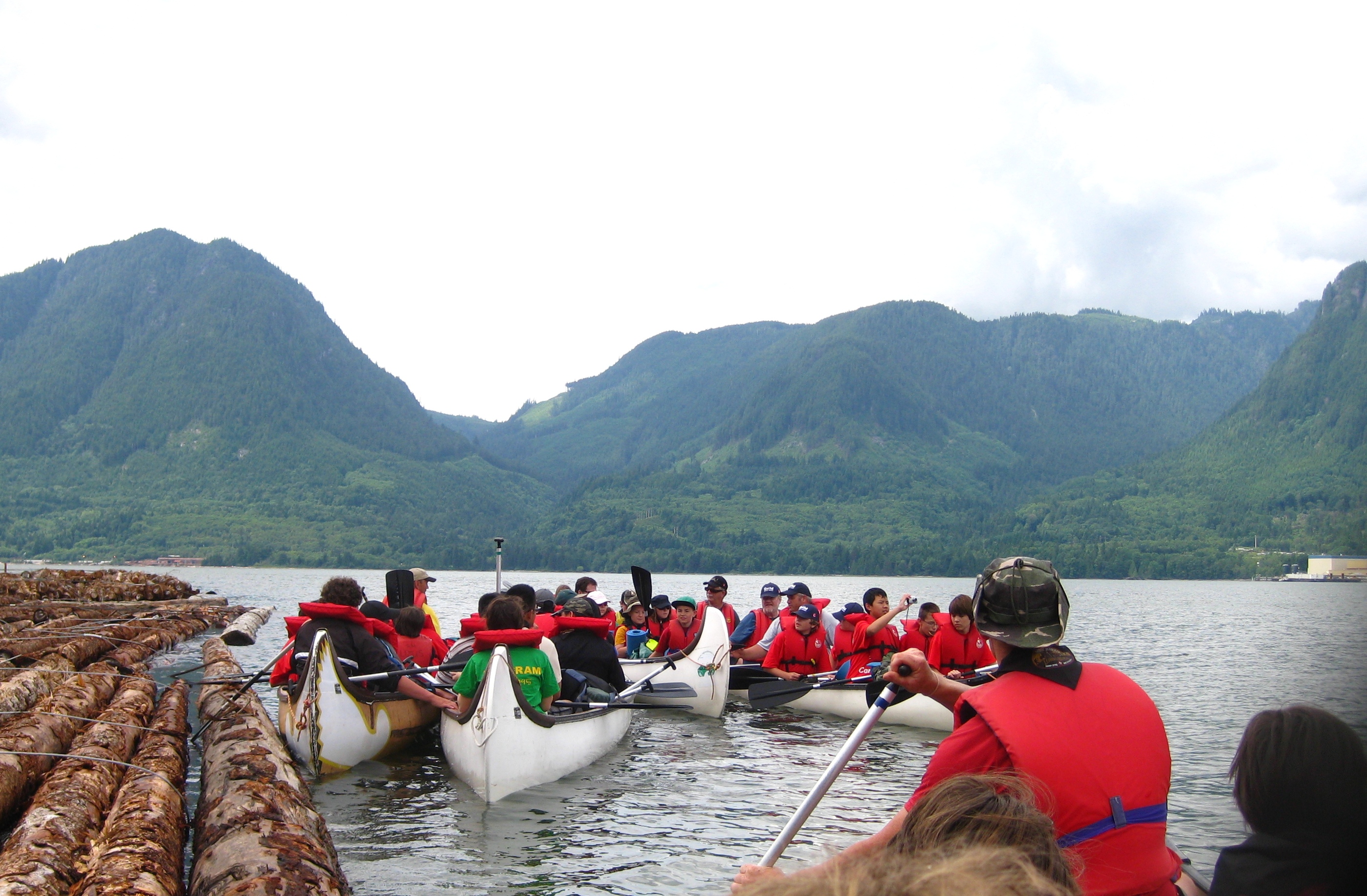 The 8 km route first took us next to Woolridge Island. We were able to watch three large birds of prey circle the trees, just above where we stopped for a short break. Our rest stop had hundreds of cut down trees all bundled together, just floating in the water, waiting to be taken to a mill. It was fantastic to observe over the rest of the canoe trip the unit come together. The water was mostly calm, except for a few boat wakes, some intentional (I’m looking at you Mr. Safety Boat Driver). 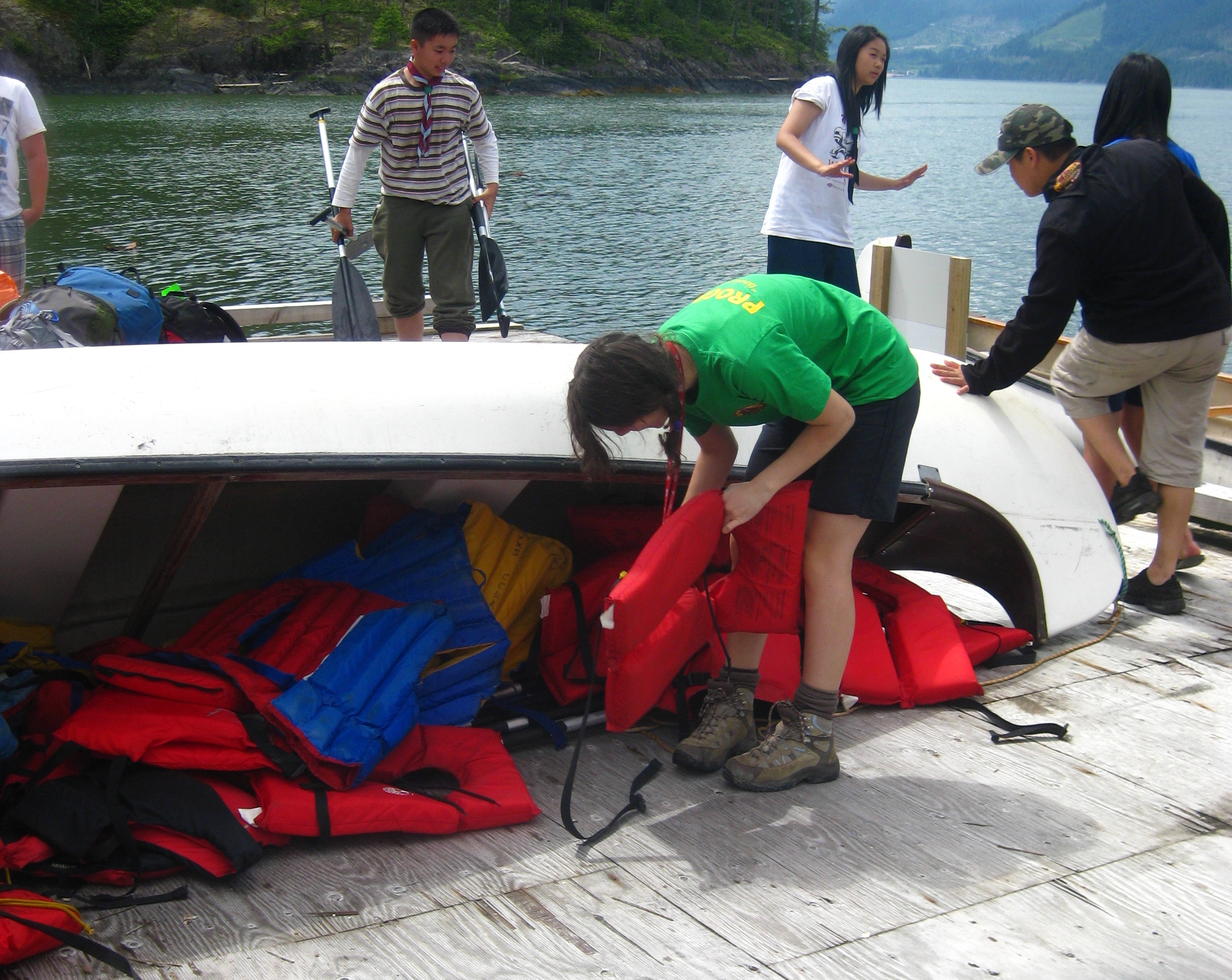 We reached our destination for the on water portion, Burrard Yacht Club dock at Ekins Point, just under 2 hours after setting out. We pulled our canoes out of the water, stored them for the next day’s group, and changed over to hiking equipment. When asked what the best part about the day so far was, the scouts came up with answers as varied as “The view”, to “Playing Frisbee.” In the reverse category, everyone was unanimous that the “numb butts” were the worse. 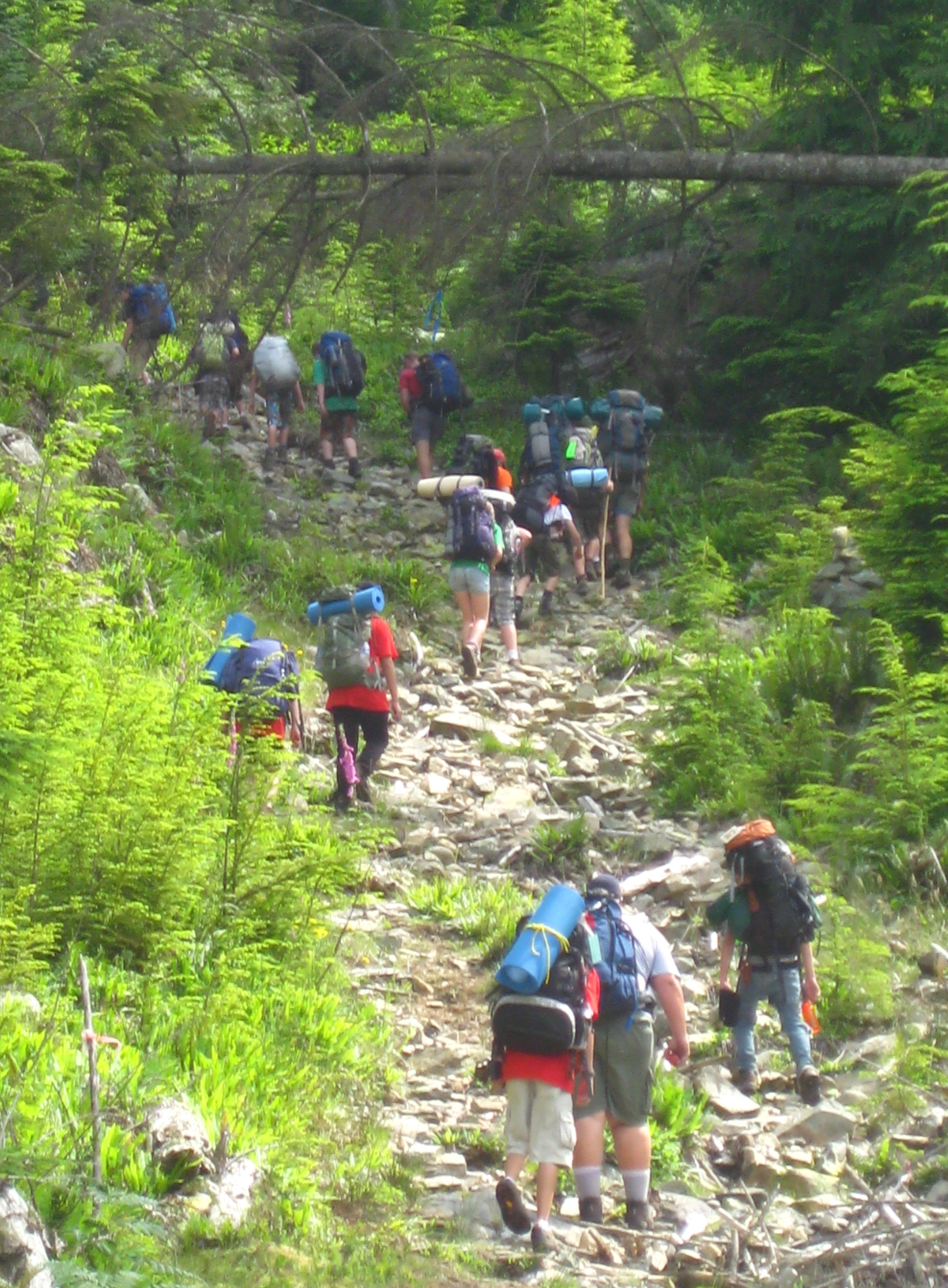 The always helpful OOS set out what we were up against next. The dock lead straight to the trail, which also went straight into uphill. This reporter went a full two minutes into the trail before hearing, “Are we there yet?” Very quickly the trail made everyone question just exactly what they had packed in their bags. At upwards of 25% grade, this hill climbed 564 meters from sea level in 1.5 Km’s. The group took plenty of rest breaks, and the different groups taught each other games to play. They would learn new games from others and energetically run back to their unit to teach it to them.

As we approached 4pm, we finally turned the last bend and arrived at Númenor. Wow. The beautiful lake glistened with adventure. 1st Kimberly got their shelter supplies and went in search of a spot to set up for the night. With a quick and easy A-frame style shelter all set up, there was only one thing to do. The lake was calling, and the scouts answered back with cheers of jubilation! The scouts splashed, swam and even “levitated” mid lake (on a downed tree). 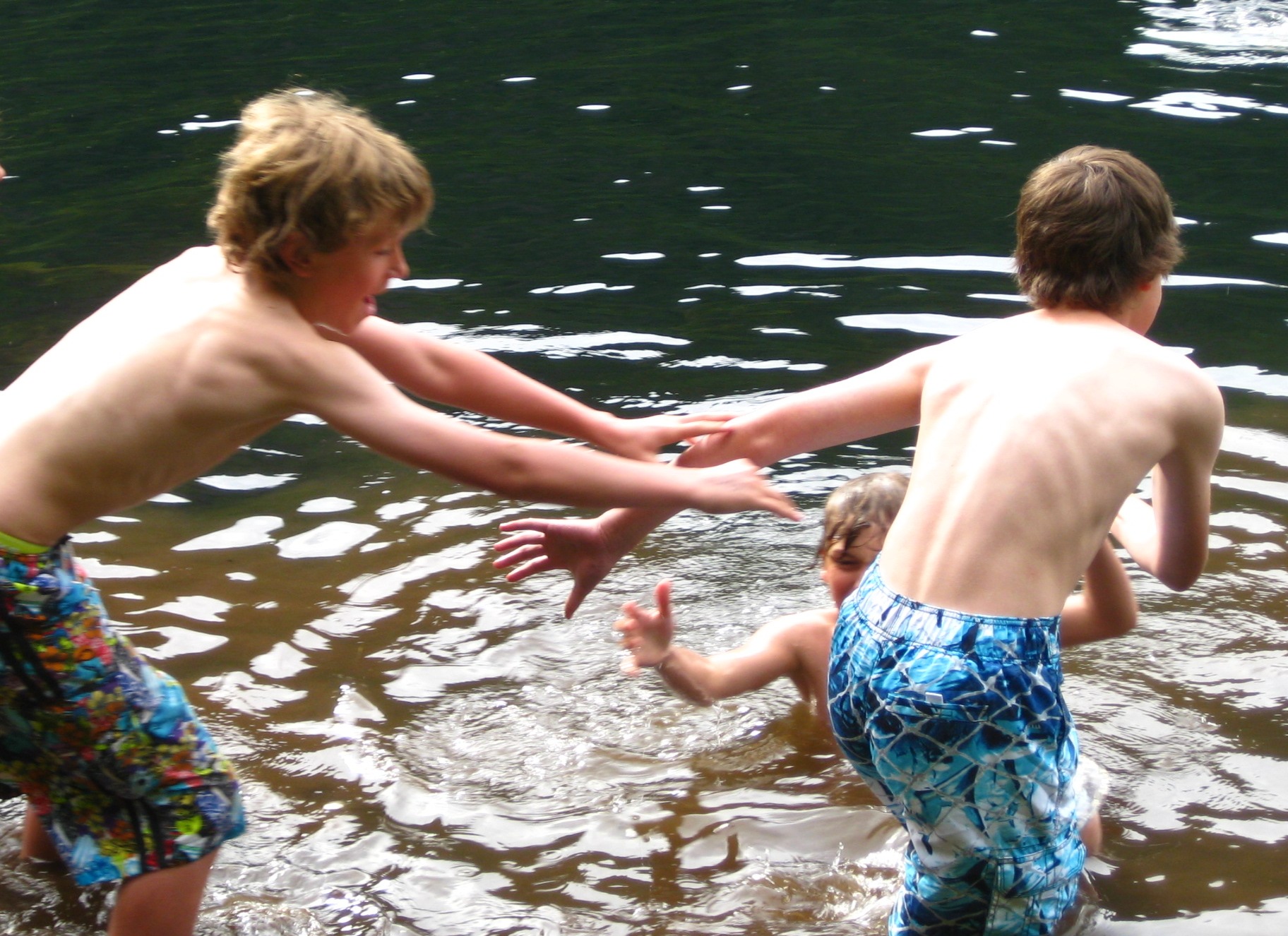 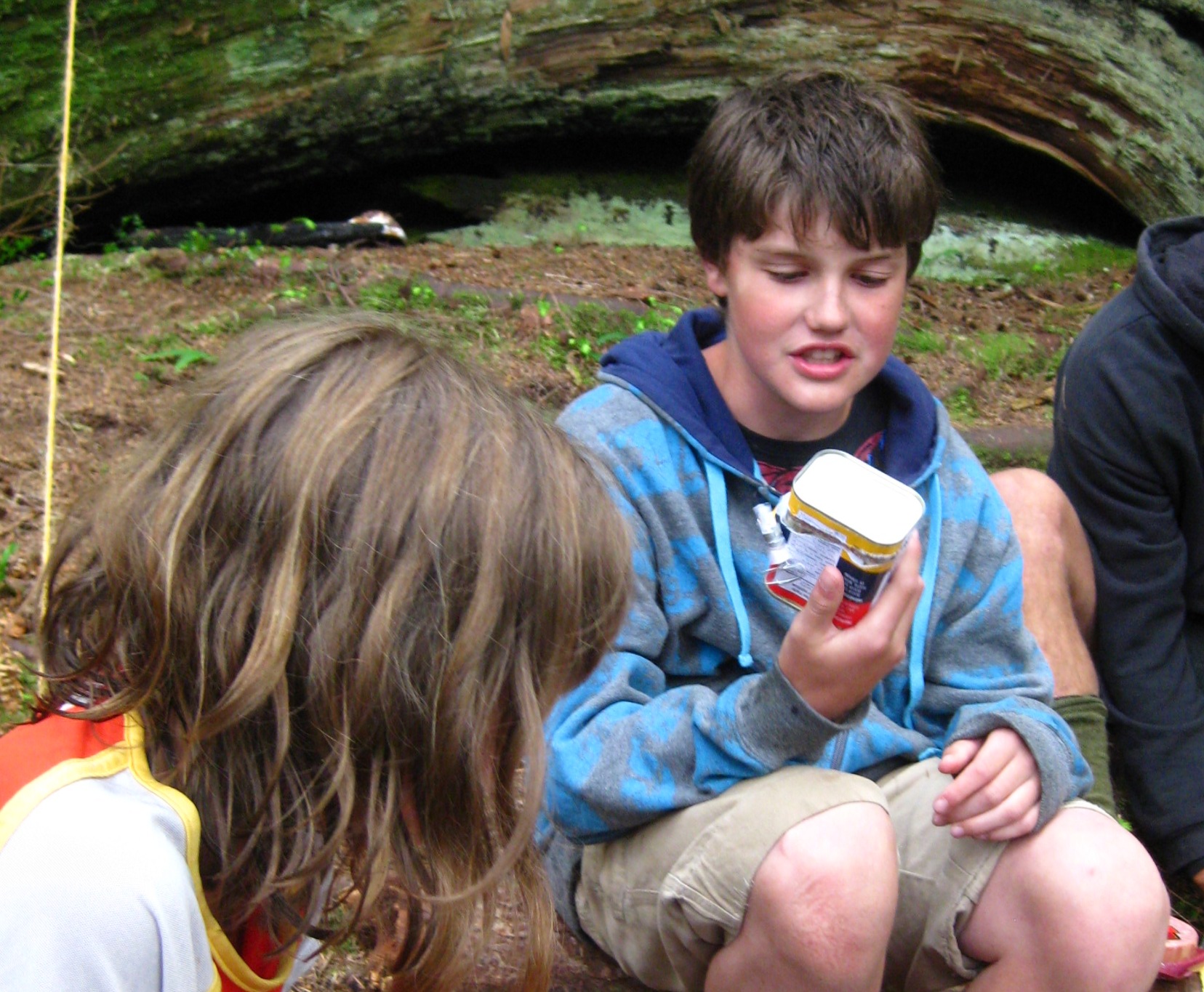 All rinsed off, dinner was in order. Salad, coleslaw, quick cook pasta and “Caramelized Hobo Steak”, which only “could have used some oregano and coriander sauce” were on the menu. With their light weight kitchen cooking in rounds, everyone was fed in quick order. Freedom to explore the campsite, the lake and the surrounding area was capped the night. Many of the youth were enamored with the amount of newts in the shallow waters in and around the lake. Quite a few were caught, contained in a tin can, and later released at the end of the night. 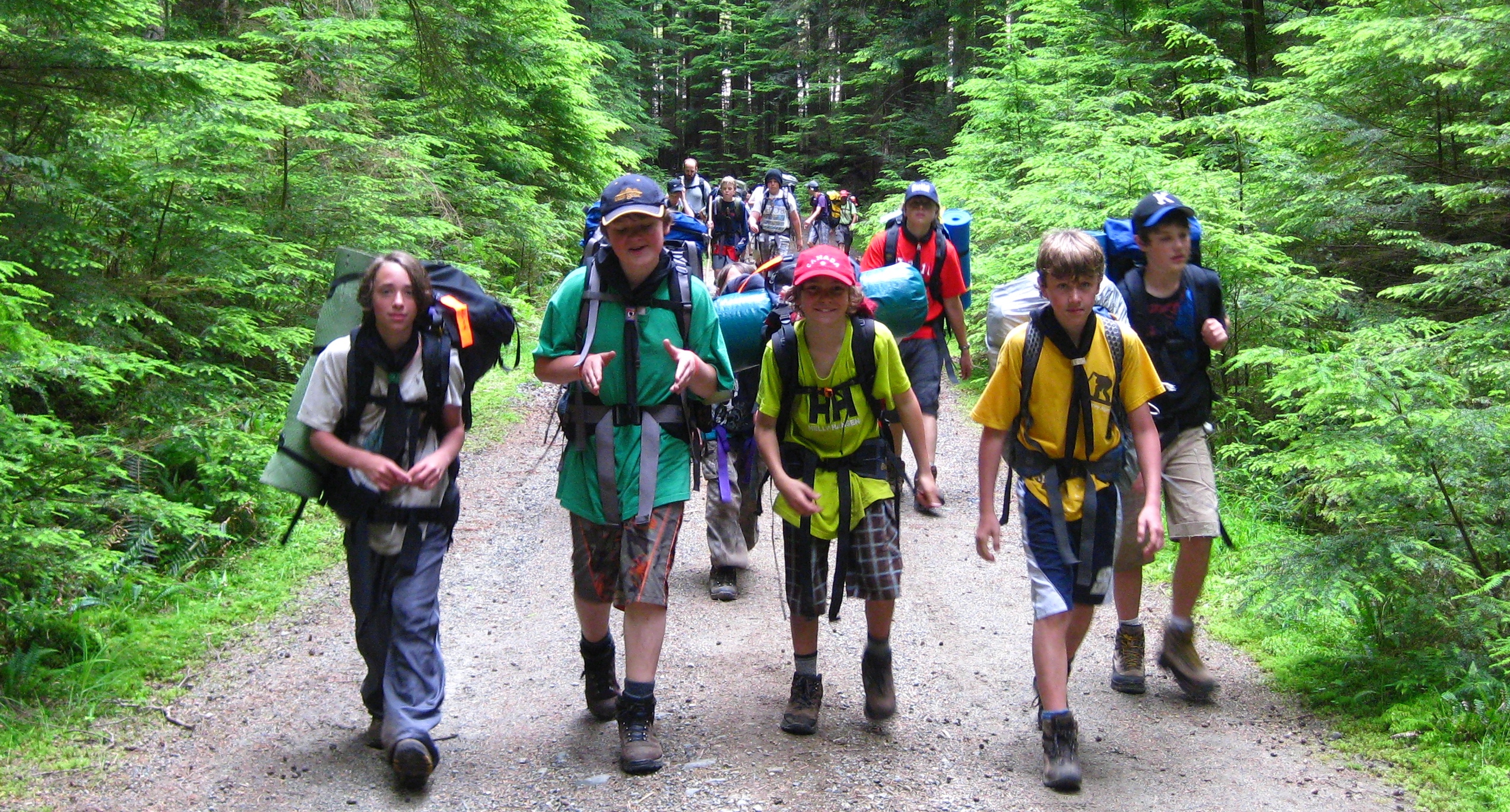 The next morning we had a simple oatmeal breakfast, packed up our personal gear, shelter and waited at the gathering point for the other groups. We were ready to go by 7:30 on our trip down the mountain, but waited for the last of the groups to gather. The route back was by a different route, 8km’s down to the water taxi. Dennis, an experienced leader who has done this same activity for PJ for the last 4 PJ’s lead us down the trail. He stopped a few times along the trail to regale us with knowledge and perhaps one or two punny jokes. Every minute. 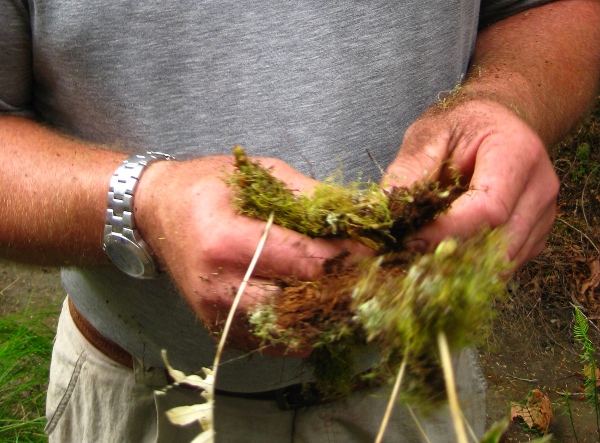 Dennis showed us where to find Licorice Ferns, which tend to grow on Maple trees, and gave us a chance to try some. Great for teas and sore throats. 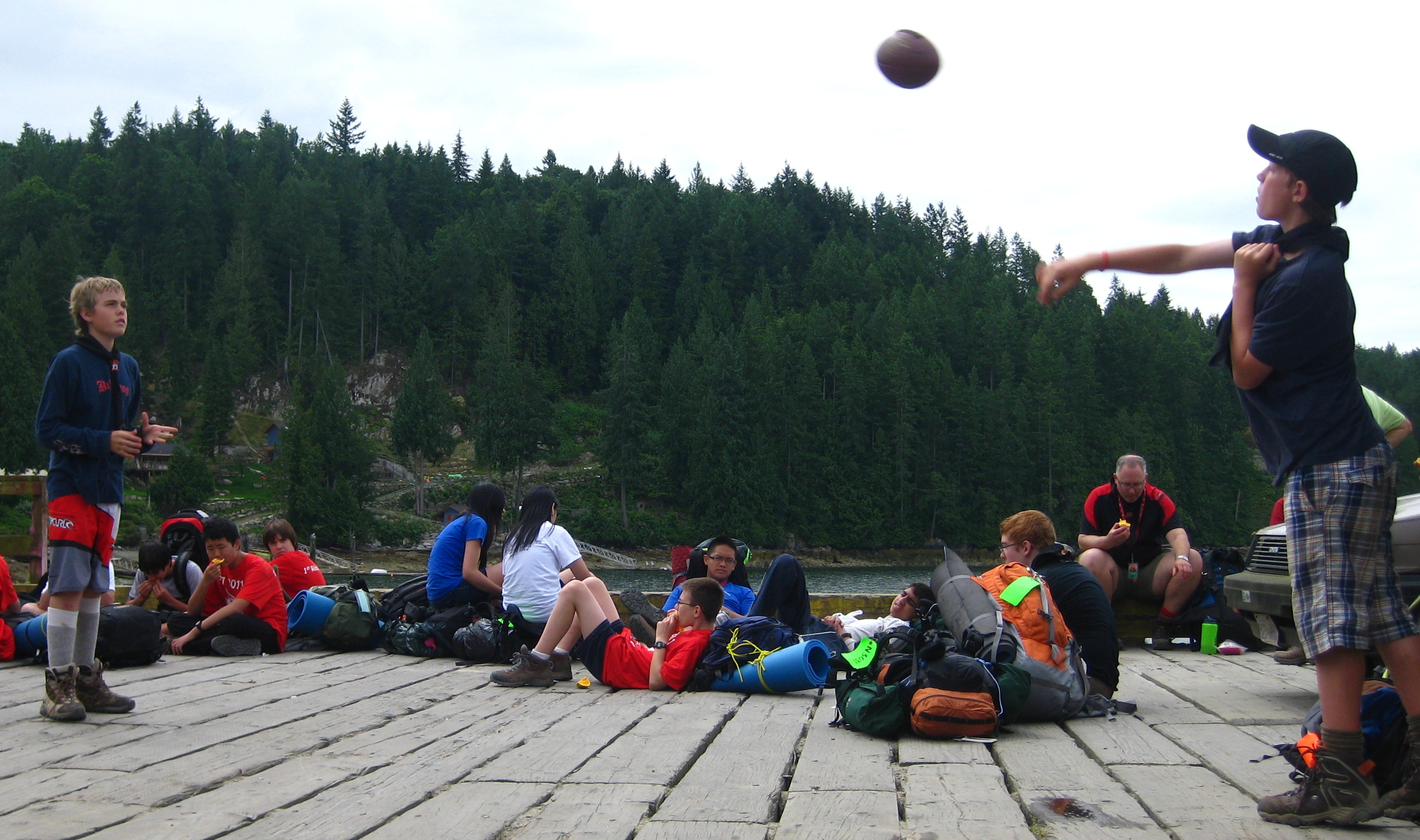 We final reached the end of our journey on Gambier Island, the public dock. The group relaxed and tried (unsuccessfully) to keep the ball out of the water. A few local otters provided entertainment, hiding and sunbathing on a nearby barge. Our ride home was on the local water taxi. PJ bound, the youth still had another four days of excitement and adventure ahead of them! 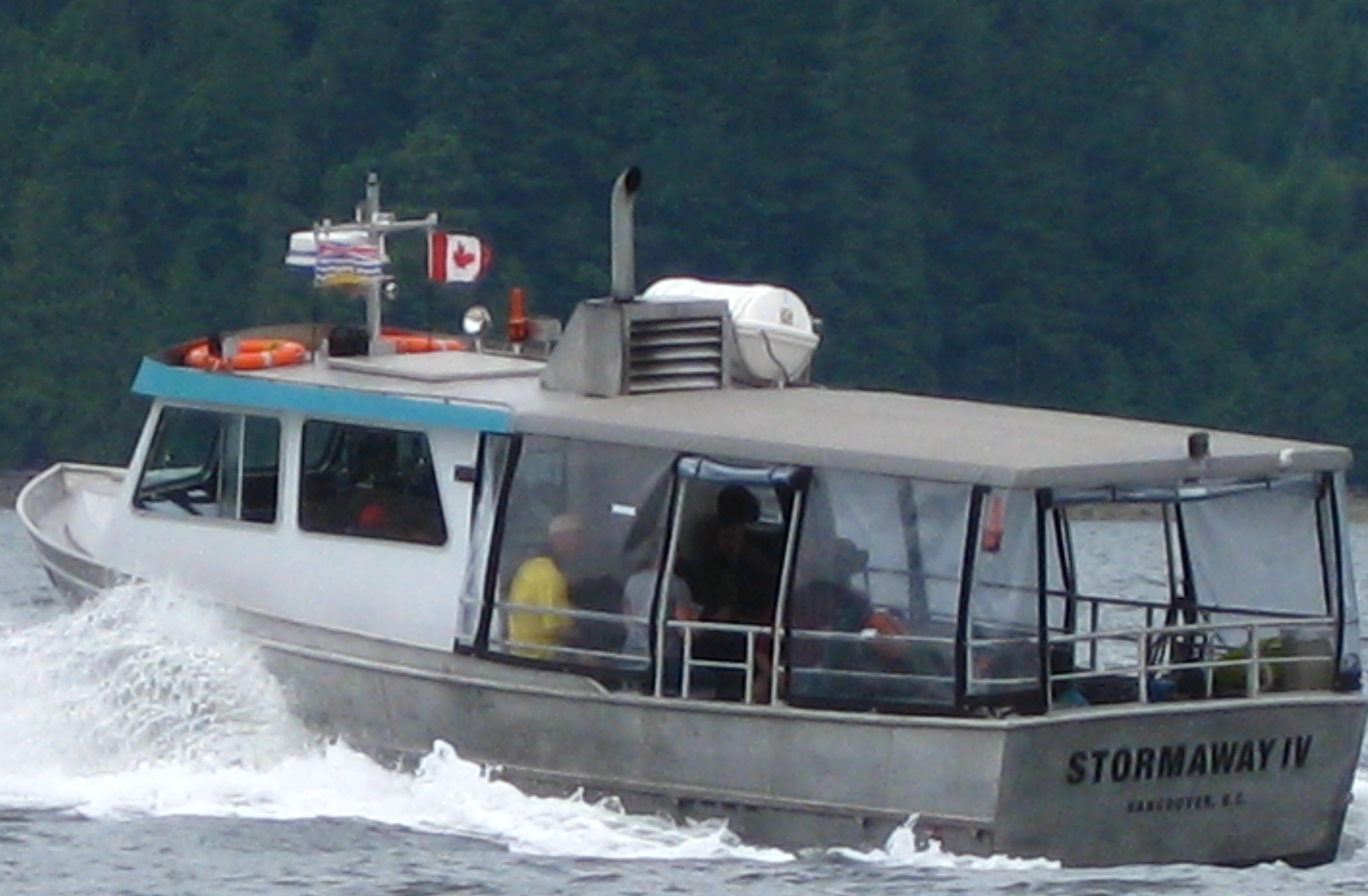 Huge thanks to Aurora, Dylan, Emanuel, Gustaf, Jordan, Kaivalya, Logan, Terek, Chris and Tony of the 1st Kimberly Scout Troop, and the OOS Anya, Brent, Dennis, Erik, Joan, Jordan, Will and all the others for putting on an amazing trip!

One response to “Return to Númenor – A PJ Journey Log”