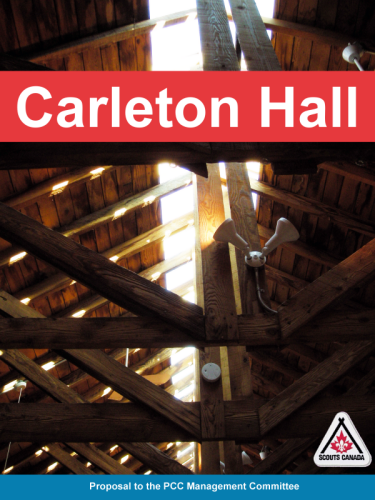 On September 15th (yes this is almost 3 weeks ago), the proposal to keep the Carleton Hall, and to allow the proposed new hall committee to operate it, finally went before the Council Management Committee. The document, as provided, is available here: Carleton Hall Proposal v2 [.pdf]. Representing the team at the meeting was Mark Burge and myself.

We were scheduled for 7pm, during the presentations portion of the night. Once called in, the mood was not in our favour. I knew the odds were stacked against us, but if you have ever walked into a room of friends that can’t bear to look you in the eye because of what’s coming, you know what I just walked into. Well to damn with that. I wasn’t going to let their mood sour mine.

With the papers distributed, the pitch began. Starting with the “spice”, we listed off some strong reasons to keep the hall that might not have been considered during the initial decision. Moving on to the “meat”, we discussed the numbers and over all plan. Finally the “heat” was applied, speaking on the team that was assembled.

Questions came up about the viability of the plan. Yes our largest chunk of income was from theatre groups for rehearsal space, which to date nobody could give a clear answer whether they would get approval for their use of the hall. Yes we have a roof that in the next few year needs replacing at an estimated cost of $8000. Yes there were a few hundred dollars in expenses from the last year to go out.

Our plan took all of that into consideration. Perhaps not at a comfort level for all, but we had an answer for all the questions. In the end, we had made our case, and left. The management informed us they would come to a decision and inform us once it had been made.

Four days later, on a cloudy evening, a solitary email arrived. In it our Council Commissioner wrote,

Thank you for coming to the Management meeting to present your proposal. After a thorough examination and discussion, regret to advise you that the management team had reaffirmed its earlier motion to sell the Tyne Hall.

There is a touch more, but that’s all one needs to know.

The hall still stands, till at some point it will be sold. The funds from the sale will go towards the growth of East Vancouver Area last I heard (No confirmation on that just yet). For me, it was an emotional roller coaster. I knew going into that meeting that our proposal faced stiff odds. I knew there were holes that we should have filled. There were some very easy ways to bolster our case that we didn’t do. For example, we had a letter of intent to rent, but only one. If we had a one or two more from theatre production companies, it would have strengthened our position that there was a demand for what we could have offered to that community.

When I got home after the meeting, I pinned the cover (seen above) of the proposal to my cork board next to my front door. One cannot walk around my home without it staring at you. It will be my constant companion and reminder that I broke my promise to Do my Best.

One response to “Operation Assertion – Save the Carelton Hall : Denouement”